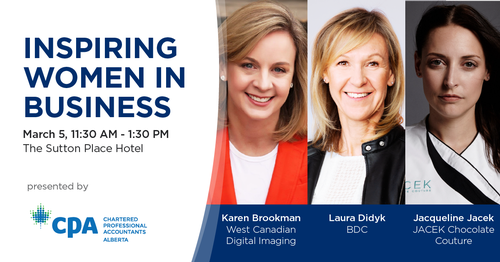 Hear about the root of their inspiration, the challenges they have overcome, their vibrant entrepreneurial spirit, their commitment to the community, and so much more. This panel is sure to motivate, inspire, and empower you! 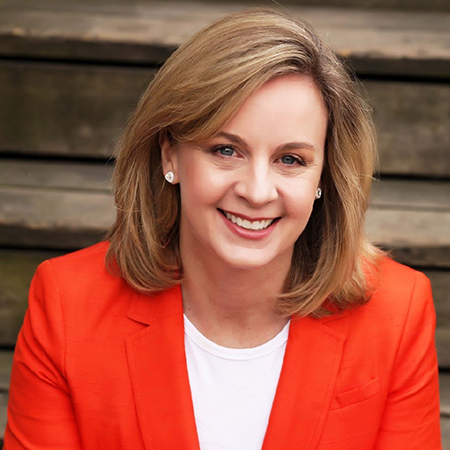 Karen Brookman is an entrepreneur and executive business leader with a proven track record for building successful services organizations. She is well-recognized for her ability to develop business strategy, cultivate strong leadership teams and bring innovative technology offerings to market.

In September 2018, Karen returned to Calgary to join her family's business, West Canadian Digital Imaging. As President and CEO, her mandate is to build the next generation of the company and to lead the development of a business and marketing strategy to grow the business across Canada. Karen is currently spearheading cross-functional innovation initiatives to advance the company's technology capabilities and competitive advantage.

Before joining West Canadian, Karen was the President and co-founder of Commonwealth Legal, based in Toronto. Under her leadership, the company grew from a regional Toronto-based imaging company to an industry-leading, multi-million-dollar, national eDiscovery company. In 2014, Commonwealth Legal was acquired by Ricoh Canada and became one of their highest performing business units. Karen was then appointed Vice President, Services for Canada where she oversaw multiple business units with combined revenue of over $100 million.

Karen has a B.A. from Ryerson University and is a graduate of several executive leadership programs at Harvard Business School.  She also has an ICD designation from the Director's Education Program at Rotman School of Management at the University of Toronto. Karen is passionate about diversity and the advancement of women in the workplace and is an Advisory Board Member for Women of Influence. 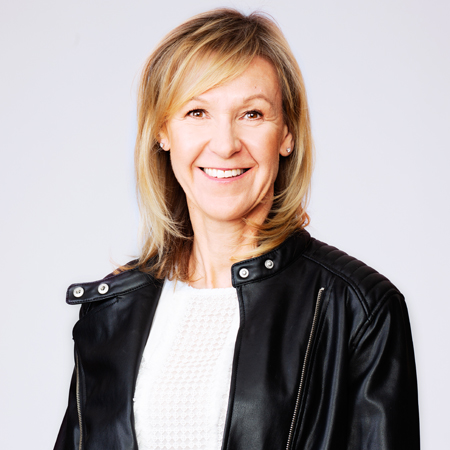 Laura Didyk is Vice President and National Lead Women Entrepreneurs at BDC. In this role, she leads the bank's national strategy to support Canadian women entrepreneurs and ensures that strategy is integrated across the entire bank.

Laura has always been passionate about entrepreneurship. Since 1994, Laura has held progressively senior roles at BDC across many divisions of the bank. From consulting and finance, to branch support and subordinate financing, Laura has worked with all types of entrepreneurs, at all stages of their business, helping them access the advice and capital needed to grow and succeed. Through this experience, she consistently saw one gap: a lack of women.

Since 2015, Laura has been an ally and advocate for female business owners and leaders. She began as the regional Women Entrepreneurs Lead in the prairies helping drive the bank's strategy and securing local champions. Today, she drives the bank's mandate to support women entrepreneurs across Canada. She sit on WEConnect International's Council on Scaling Women-Owned Businesses, is a sought after speaker and presenter on the topic of women entrepreneurship and leadership, and regularly mentors and coaches female entrepreneurs.

Having lived and worked in Calgary for over 20 years, Laura spends as much time as she can in the mountains skiing and hiking with her husband and two daughters. A Chartered Professional Accountant (CPA), she holds a Business degree from the University of Manitoba.

People don't disagree with Jacqueline Jacek when she says that she has one of the best jobs in the world as a "Cocoanista" - a chocolate designer. The concept was created when she couldn't decide whether to become a fashion designer or a chocolatier, so combined the two to create her dream job. Like fashion, JACEK launched seasonal collections to that are a treat to the eyes and the taste buds, and have a Fabric Collection which is their bean-to-bar line where chocolate is made in-house from the cocoa bean. JACEK Chocolate Couture was started late in 2009 in a basement in Sherwood Park, and now includes a production facility, three retail boutiques (Sherwood Park, Edmonton and Canmore), and an online store. Though they are committed to innovation, artistry and the best ingredients, JACEK's quest is ultimately to spread joy through fine, fashionable chocolate.

Jacqueline has been chosen at one of the Top 10 Chocolatiers in North America by Dessert Professional Magazine in NYC (2011), the Don Neil Young Entrepreneur of the Year (2011), Strathcona County Business of the Year (2014), Global Woman of Vision (2015), a recipient of the Leaders award by Business in Edmonton Magazine (2015) & Avenue Edmonton's Top Chocolatier two years in a row (2016 & 2017).  In 2018 & 2019, the JACEK Fabric (bean-to-bar) collection has won medals in the International Chocolate Awards for the Americas, and the world.